I have taken some of my favorite books and put them into this list for 25 chapter books for summer reading. Some of them are magic, some are adventure, all of them are books you will have fun with in the sun. These books are appropriate for ages 8-13. 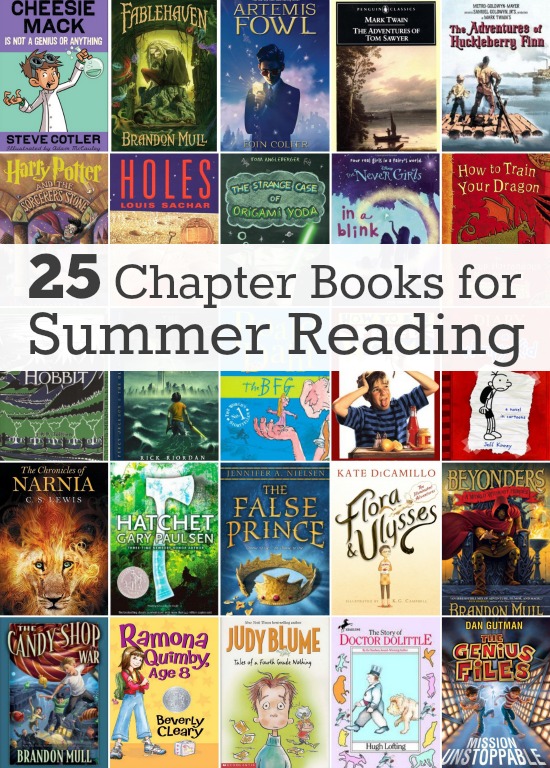 1. Cheesie Mack – See my review found here to learn more about this series.

2. Fablehaven – Fablehaven is their grandfather’s estate that seems rather unusual, but after a quick taste of magic milk their eyes are revealed the world of magic and adventure all around them. Here’s an interview my mom had with the author Brandon Mull.

3. Artemis Fowl – Artemis is a 12 year old criminal mastermind, who has become mixed up with fairies and technology and their super advanced subterranean home.

4. The Adventures of Tom Sawyer – He is an adventurous kid who lives in an old town with his friend Huckleberry Finn. In the story, they go off together in the search of treasure running into the infamous Injun Joe.

5. The Adventures of Huckleberry Finn – Huckleberry Finn has been adopted by an old woman and has begun a normal life, but he’s not really sure he likes that life and decides to run away. He meets a runaway slave and together they travel and meet many mischievous people along the way.

6. Harry Potter – Harry is a normal 11 year old boy, that is until he receives a letter from Hogwarts School of Magic. From then on his world is turned upside down when his friends Ron and Hermoine are constantly faced with battles against the evil Lord Voldemort,, or as most people call him, He Who Must Not Be Named.

7. Holes – This is a story about a kid named Stanley Yelnat who is part of a family that has almost a curse of bad luck on them. He receives his worst bad luck when he is arrested for a crime he didn’t do and is sent off to Camp Greenlake. The kids are told to dig holes in the barren dessert all day long, as more adventures ensue.

8. Origami Yoda – See my review found here to learn more about this series.

9. The Never Girls – Three friends are playing soccer when suddenly their sister comes out to find a fairy in their mother’s garden. In a blink of the fairy’s eye, she transported the 4 girls to Neverland where they have an adventure beyond imagination.

10. How to Train Your Dragon – Meet Hiccup, pre-teen viking with a dragon. Hiccup wouldn’t really seem to be a viking hero, but that’s how things turn out.

11. The Hobbit – Bilbo Baggins is a hobbit. Gandalf the wizard has invited him to go on adventure of a lifetime filled with treasure. But that’s not all he finds.

12. Percy Jackson and the Olympians – Percy finds out he has a power, he can control water. And did I mention his dad is an Olympic God?

13. The BFG – See my review found here to learn more about this book.

14. How to Eat Fried Worms – We’ve reviewed the book here.

15. Diary of a Wimpy Kid – Greg is a kid who has a mixed up life and likes to record it in his diary (cough)… journal.

16. Chronicles of Narnia – Four children find themselves inside of a wardrobe, or so it seems as they are transported to the magical land of Narnia.

17. Hatchet – Brian is going to visit his father over in the Canadian oil fields when the plane he’s flying in suddenly crashes. He is forced to live off of his wits and survive until he can be found.

18. The False Prince: The Ascendance Trilogy – This book has a total twist where an orphan child is groomed to be prince to take over the throne.

19. Flora and Ulysses – Natural born cynic, Flora finds herself giving CPR to a squirrel who has just been sucked into a vacuum, which gives the squirrel extraordinary powers.

20. The Beyonders – Jason hears a strange sound coming from the throat of a hippo. He goes to investigate and is suddenly transported to a magical world, where he is known to be a beyonder.

21. Candy Shop Wars – Four friends have discovered a candy shop run by a mysterious old lady. In return for a favor, she offered them some special candy and you’ll have to read what happens next.

22. Ramona Quimby Age 8 – Ramona finds herself in the 3rd grade and must try her best to be brave and face school for the year. Of course with Ramona, you never know what just might happen.

23. Tales of the Fourth Grade Nothing – Peter has a 2 year old brother named Fudge that he wished he didn’t have. Fudge continues to mess everything up and Peter has to learn to deal with the problems.

24. Dr. Dolittle – A man named Dr. Dolittle is a very special man because he can talk to animals. He’s possibly the greatest animal doctor the world has ever known.

25. The Genius Files – Coke and Pepsi, two genius twins, are assigned to go to a special school. But it turns out there really is no school. They have been assigned to a special organization of genius children to change our nation’s future.

Matthew is a creative kiddo who loves to read. His favorite books are Fablehaven, Ender's Game, and Harry Potter. He also loves to play minecraft, eat blueberries, and go mountain biking. 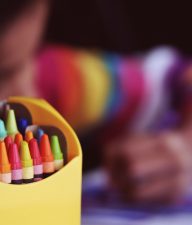 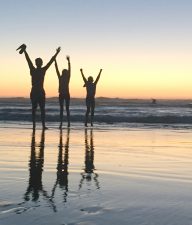 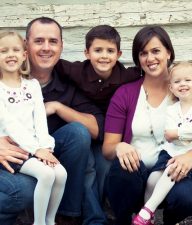 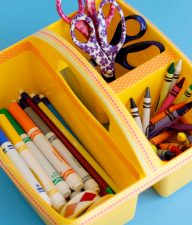